It’s so easy to be a taker. Goods and experiences are on tap in my 21st century, western lifestyle – as long as you’ve got the money instant gratification is so easy . The kinda cycling I do is pretty much the same with so many events going on; you can register online, pay and then rock up to a village hall, ride a 200, 300 or longer audax on beautiful roads most weekends of the year. With few exceptions they events rely on individuals giving up their time in the days and weeks beforehand planning, and volunteers making time on the day to support us. I’m always immensely grateful and I have tried to give back by being a helper myself.

Two years ago that meant helping at a control for London-Edinburgh-London. This year I returned to the Transcontinental as volunteer at the start and control point 1, both in Bulgaria. It was an incredibly rewarding experience though I’m worried it made be want to to participate in an event like the TCR again…

This year’s start was in Burgas on Bulgaria’s Black Sea coast. It was strange seeing the beach holiday crowd being infiltrated by the tribe of ultra-distance cyclists. Registration took place on a Friday in a park ahead of the start early the next morning. The atmosphere was a mixed one: friendly reunions of riders from previous editions; nervous excitement among those riding for the first time; and a slight sense of carnival as groups of riders met up, went out for food and drank beers.

My role was taking photos and conducting interviews and I tried to get a portrait of every rider as they completed registration and donned their iconic numbered caps for the first time. The expressions tell so many stories. Some seemed overwhelmed: simply warring the cap made the fact they were about to ride across Europe suddenly seem so real. Others were quiet and subdued battling their nerves or just wanting to get the show on the road. There were outward shows of bravado but often it felt like a mask – show the world you are confident and you’ll feel confident too. Of course a few had genuine reason to be assured having been there and done that and they mostly acted with understated calmness. Lastly a strange celebrity in a small community hung around the vedettes of unsupported racing bemusing the likes of Matt Falconer. The change of start time also created a beautiful atmosphere on Friday night as riders coalesced into groups after the briefing and went and found dinner together, bonds of friendship being built between people who were strangers a few hours before.

A day later I was at CP1, and the riders had been through a hard, hot day when they arrived. The CP was located on the flank of Buzludzha Peak in front of a overgrown monument from Bulgaria’s communist days and with the iconic House of Communism looming above – an improbable, derelict Bond villain’s layer that looked like a matte painting rather than reality. Everything was a bit chaotic as the Bulgarian communist party had been gathering during the day meaning we could barely get the CP set up in time for the first riders. We also lacked mobile reception or electricity. 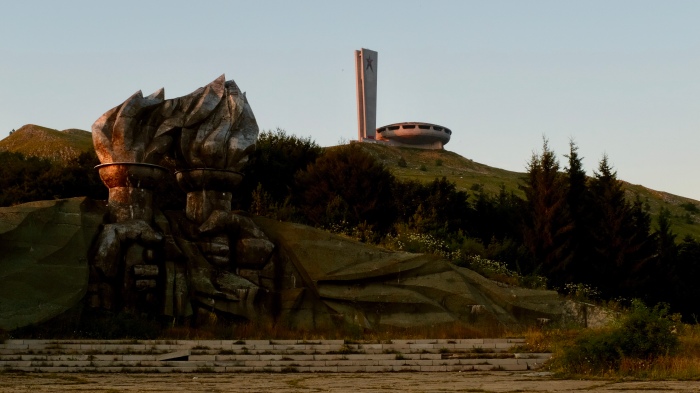 For the riders it didn’t matter. The CP was about 270km from the start and they had 26 hours to arrive. Most were determined to make it on the first day ideally before nightfall. The first rider came through mid-afternoon. Ones and twos followed until there was steady stream from early evening. Sweat-stained and shell-shocked you could see the enormity of the TCR setting in. A challenging parcours from Burgas meant many were way behind schedule with the physical hardship and a liberal dose of punctures. The heat had been a brutal introduction with many complaining about how hard it was to eat or find water. Expectations were being reset.

The early arrivals all pushed on planning Grabova for dinner and a hotel or even further but from about 10pm a pattern set in with riders deciding the exposed mountainside was the perfect place to stop for the night. The CP became a temporary campsite and I reckon there were nearly 40 riders sleeping around us in the dark. While I understood their thinking it seemed like a poor choice as temperatures plummeted at night with the altitude and wind.

The last rider who rode straight through got to us around 3am. The online tracker showed the remainder stopped in the valley choosing to sleep so they could tackle the climb to the CP in the morning. I grabbed a brief nap in my hire car and awoke again around 5am as this group started arriving. Somewhat fresher they were clearly concerned about making the time cut off and how much they were already on the limit.

By now the sun was coming up revealing everyone who had been sleeping at the CP. The scene looked like the aftermath of some bizarre massacre – abandoned bikes alongside bodies cocooned in bivvies so the riders looked like corpses ready to be carted off to the morgue. It’s amazing how soundly humans can sleep in the most improbable of locations when they are completely shattered.

The final rider to arrive while the CP was open made it with eight minutes to spare and we then packed up. Next to make it was one of the pairs who had had a shocking first day, slept early and got back on the road at 1am to only miss out by 20 minutes. You could see the deflation as we told them we had closed but it was heartening to see them gamely push on – they may be out of the classification but they can still finish.

For me this was the hardest part of being a volunteer. The rules of the TCR are simple but strict including that it is unsupported. Riders arrived needing water or food or tools to fix their bikes. They wanted to know what was ahead: where might they top up the bottles or find a bed? The rules meant we couldn’t help beyond friendly words and, in one instance, a hug. It left me feeling deeply conflicted seeing people who needed help but knowing they’d signed up for this because they wanted to push themselves and not take the easy route. They got a big taste of that in the first 24 hours. I’m now willing their dots across Europe with a bit more insight into the people, personalities, dreams and frailties of what is otherwise just a point moving in fits and starts across a map on my computer screen. And I’m grateful for a chance to be a small part of their story.

View all posts by wja